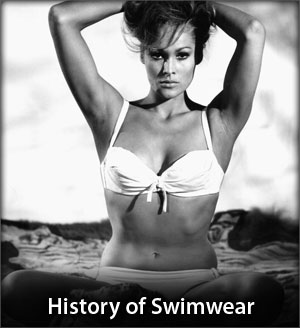 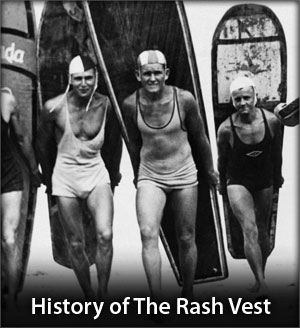 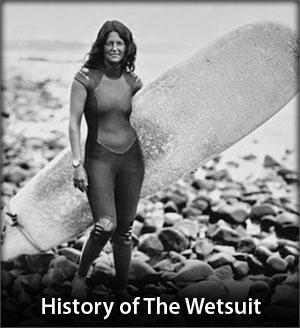 In the 18th century men were still swimming naked, but women wore linen shirts as ‘bathing suits’. The first real bathing suits that followed were made of wool and cotton and quite heavy when wet. The colours of bathing suits were initially also very basic: red, blue or black. The bathing suits covered the whole body, and not just out of decency; having a sun tan wasn’t fashionable at all in those days since it made you look like a ‘farmer’.

The one-piece bathing suit originates from the end of the 19th century and was a major stepping stone in the history of swimwear. The new bathing suit, for both men and women, had a collar, and pants reaching over the knees. Striped bathing suits also became fashionable around that time.

It wasn’t until after World War II that two Frenchmen invented the modern bikini, which shows the navel and was the next major stepping stone in the history of swimwear. In 1946 Jacques Heim first invented the ‘Atome’, named so because it was a very small two-piece bathing suit. Then an engineer named Louis Réard, made sure his bathing suit was even smaller and named his two-piece outfit the ‘Bikini’, after the Bikini island where a nuclear test had taken place that year. Réard wanted the excitement about his new Bikini swimwear to be just as ‘explosive’...

The Frenchman was right: it did shock the world seeing the sexy bikini on a Parisian catwalk for the first time. The invention made everyone forget about the ‘Atome’ and ’Bikini’ became the generic name for two-piece bathing suits in Europe. It took a while for the rest of the world to take a liking for bikinis and they were initially banned in the USA and Catholic countries.

In the 1950s the female shape was more and more acknowledged with built-in bras and an accentuated waist for bathing suits. But bathing suit bottoms still reached above the navel and tops fully covered the bust. Men started to wear nylon bathing suits, mainly trunks.

In the late 50s Lycra was invented, which made bathing suits much more durable, comfortable to wear and easier to dry. In the 60s curved hips became more accentuated and the song "Itsy-Bitsy-Teenie-Weenie-Yellow-Polka-Dot-Bikini", which was all about being shy wearing a small bikini on the beach, became a radio hit.

This shy attitude towards bathing suits changed during the sexual revolution in the 1970s at the history of swimwear was changed forever. Bikini tops were not much more than bra’s by now. Having a sun tan had become popular too, so the more skin was revealed the better.

In the late 70s the one-piece bathing suits came back, but this time high-cut, showing the hips. In the 80s see-through netting was introduced and topless bikinis (‘mono-kinis’) became accepted. It was also the decade of the thong-bikini (or ‘Brazilian’): a tiny string-like bikini that leaves most of the buttocks exposed.

At the end of the 20th century the focus shifted back to practical bathing suits for speed and the classic one-piece bathing suits were commonly worn again, while skimpy bikinis were still in vogue for on the beach. The 1990s saw the introduction of the ‘Tankini’ for women: a tank top and bikini bottom combined.

By the early 2000s there is no limit to the range of swimwear that you can buy. Manufactures design all types of bathing suits for all shapes and sizes. It is the decade of the ‘mankini’ and 'burqini', but don’t think we’ve seen it all!

Appropriately at the 65th anniversary of the bikini, www.swimwearshack.com.au was launched in 2011, providing a full range of classic elegant swimwear and exciting bikinis, one-piece bathing suits, rash vests, wetsuits and beach and pool accessories. There is something for all ages and sizes, men and women, boys and girls!